A historical narrative of the Île Chèvrefils Mill, produced in collaboration with the Société du Musée du Grand Châteauguay. 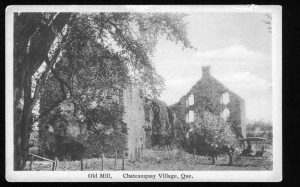 In February 1765, after acquiring the Seigneury of Châteauguay, the Grey Nuns built another mill about four kilometres from the manor house now known as Manoire D’Youville. A dike 120 metres (400 ft.) wide and a canal 85 metres (280 ft.) long to direct the water to the mill were constructed at the same time. The project took four years and was completed in 1769. This was Mother d’Youville’s idea, to support the tenants who then were no longer obliged to go all the way to Fort Châteauguay island (now called Île Saint-Bernard) to have their grains milled.

That dike and others built subsequently, while very useful, caused some problems for certain residents and, indirectly, for the Grey Nuns, because they were detrimental to navigation and the upstream migration of fish.

In 1839, after making the decision to repair the old mill, the Sisters realized that the planned repairs would be insufficient. On the advice of the workers, the old building was demolished. It was shut down on April 15, 1839, and the workers hastened to dismantle it down to the foundations, to build a new one. On October 1, 1840, after just a few months of work, the new mill was ready to go and the miller returned to his post to grind grain. Although Mother McMullen had only planned a budget of 300 pounds for the renovation, she declared: [translation] “Divine Providence always provided us with money to give to the workers every time they asked, and no one was sent away dissatisfied. We soon paid off the accounts of our other creditors.”  The miller had to wait until 1845, however, to take back possession of his home.

In 1863, Sister Reid received a letter after a consultation about the dike, in which John Walker recommended that the Grey Nuns carry out work to improve the operations of the mill and increase the property value. It was also recommended that they raise and reinforce the dike to ensure it could withstand the tests of time and weather.

For many years, in the spring, the dike required significant expenditures, and the income from the mill was not enough to cover them. Ultimately it was sold for about $5,000. The new owner turned it into a tool factory.

Construction of the mill by the Grey Nuns and excavation of a canal, making the point an island.

Construction of a wool-carding mill and a sawmill.

Lawsuit against the Grey Nuns, claiming that the dike prevented fish from migrating up the river.

Demolition and reconstruction of the mill built in 1765.

Loss of lawsuit for damages caused by the dike.

The upper part of the dike is carried away by the ice.

A new dike is built to replace the one destroyed by the ice. 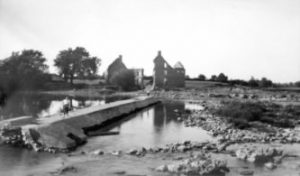 The dike (or dam) still exists. You can see it near what is now Île Chèvrefils, between the Centre d’hébergement Châteauguay (95 Chemin de la Haute-Rivière, on the west bank of the Rivière Châteauguay) and Parc Valérie-Fournel (Boulevard Salaberry Sud, east bank). 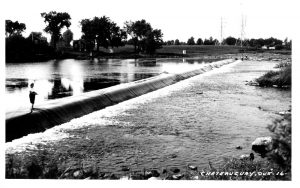 Around 1830, a lawsuit was filed against the Grey Nuns. The plaintiffs claimed that the dike was preventing fish from migrating up the Rivière du Loup (former name of the Châteauguay river). To counter the charge, the Mother Superior sent three men up the river to look for fish, which they brought back to the courthouse, proving that fish could, indeed, swim up the river.

The site is protected as a spawning ground for fish from November 1 to June 30 every year. In 1826, a sawmill and a wool-carding mill were added to the Grey Nuns’ mill by Mother Lemaire. Around 1837, the carding mechanism was sold to operate a new carding mill.

On July 7, 1840, Mother Beaubien, the Grey Nuns’ Mother Superior, presided over a ceremony to bless the third mill. It caught fire in the late 1860s.