A historical narrative of the Île Saint-Bernard Mill, produced in collaboration with the Société du Musée du Grand Châteauguay. 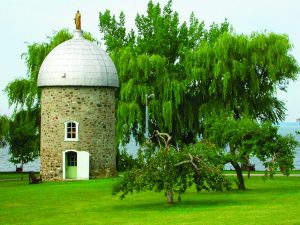 The obligation to “tenir feu et lieu” on land granted as a seigneury – which basically meant clearing the land, building homes and making the land productive – obliged the lord of the seigneury to build a mill so the tenant farmers could make flour. The construction of a windmill attracts settlers and becomes a source of income for the lord. A royal declaration published on October 21, 1686, ordered the lords to build communal mills on their lands in the next year. Île Saint-Bernard was an ideal place to erect a windmill. Although it is hard to accurately determine the date when the mill was built on the island, its construction is attributed to the Le Moyne family. The employment contract of a soldier named Laforest, written on December 26, 1686, proves that the mill was already built and that the person was hired “[…] either to clear fields at the mill or perform other tasks.” Built in the French tradition, the Île Saint-Bernard mill is a tower-style mill of modest size, 6.5 metres (21 ft.) tall. The tower has two entrances, a ground floor and two upper storeys. The conical roof holds the milling mechanism.

Mother d’Youville bought the seigneury on June 8, 1765, and discovered that the windmill was not very profitable, as it was too exposed to high winds and the site was hard to access for the increasingly numerous tenant farmers. She decided to build a watermill a league away from Île Saint-Bernard in the winter of 1765. The new mill was equipped with the millstone from the Île Saint-Bernard windmill and the one from the Charron brothers’ mill in Montréal.

Although it was in use for less than 80 years, the Île Saint-Bernard windmill nevertheless marked the beginning of the colonization and industrialization of Châteauguay. Unlike many of Québec’s mills, the Châteauguay mill is still holding up to time, reminding us of a time when people went there for both subsistence and socialization. Now owned by Ville de Châteauguay, the tower owes its continued existence to the Grey Nuns.

The Seigneury of Châteauguay is granted to Charles Le Moyne and Jacques Le Ber.

Conflict begins between the French and the Iroquois. Soldiers stationed on Île Saint-Bernard are killed. The war ends in 1701.

Construction of the Île Saint-Bernard windmill.

The Grey Nuns of Montréal lease Île Saint-Bernard and renovate the windmill.

Seigneury of Châteauguay purchased by the Grey Nuns of Montréal. Closure of the windmill. Construction of the watermill on Île Chèvrefils.

Centennial of the Grey Nuns’ purchase and restoration of the old tower of the old windmill. 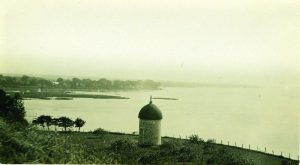 The political situation in New France grew worse and war broke out with the Iroquois in 1683. The Châteauguay mill served as a redoubt; the arrow slits inside attest to the dual purpose of the building. During the conflict, while soldiers were posted on Île Saint-Bernard an officer was slain near the mill on September 9, 1690. He was buried in the Lachine cemetery, and the priest entered this death notice in his records:

[translation] “This 10th Day of September 1690 was buried in this Church of the Holy Angels of Lachine the body of the deceased Lord Jean des Marests, horseman, second in command of the marine detachment commanding for the King the fort of Chateau Guay, who was killed yesterday morning by enemy Iroquois near the mill of the said Chateau.” 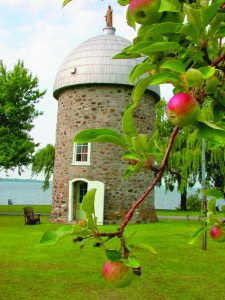 The windmill tower was left standing, unused. There were no plans to pull down the stone tower, which was still standing in the mid-19th century. A chapel was erected in 1865 called “Bethlehem” for the occasion. A tin dome was built on the tower for the sum of $40 and it was topped with a statue of St. Joseph, for whom it was built.