A historical narrative of the life of Jean-Pierre Houde, produced in collaboration with the Société du Musée du Grand Châteauguay. 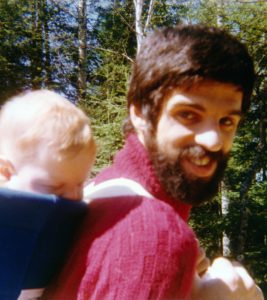 Jean-Pierre Houde was born in Montreal on April 25, 1951. His mother, Bérangère Dubuc, was a seamstress and his father, Fernand, worked for Hydro Québec. His childhood was spent on Rue Aylwin and then on Rue Joliette, with his brothers and sister, in the Hochelaga-Maisonneuve neighbourhood of Montreal.

Interested in culture since his early twenties, Jean-Pierre studied recreation technology at the Vieux Montréal CEGEP, graduating in 1973. At that time, he met Chantal Deschamps, who he married on May 18, 1974.

During and after his studies, he was a cultural activity leader for the Ville de Montreal. He left this position in 1975 to work at the Bois-de-Boulogne CEGEP before he was hired by the Ville de Châteauguay in March 1977. He first held the position of socio-cultural stage manager and was then promoted three months later to the position of socio-cultural activity leader. He obtained permanent status in September of the same year.

Given the circumstances of his new job, Jean-Pierre and his wife Chantal decided to settle in Châteauguay. Their daughter, Sophie, was born on December 1, 1977 and two years later they purchased their first home as the crowning achievement of the lives of these two young professionals. 1979 was a year of great change for the couple, with Chantal landing a job as a French teacher at Howard S. Billings High School.

In the same year, through his involvement with the Fédération québécoise des services socioculturels, Jean-Pierre was invited to Quebec City to attend an organizational meeting for the 5th edition of the Festival Création-Danse de la jeunesse du Québec, planned to be held at the Louis-Philippe-Paré school. Since the buses were on strike, he had to take a plane to get there.

On his return journey, Jean-Pierre, who was often the subject of friendly teasing about his lack of punctuality, had to negotiate with the flight attendant to board the plane since the doors had already closed. After insisting, he was finally able to join the passengers on the plane. This flight marked the last moments of his life.

During take-off, a mechanical defect in the right engine rotor caused the Fairchild F-27 aircraft to crash barely 1 km away. Jean-Pierre, then 27 years old, and 16 other passengers, lost their lives in this terrible accident. Among them were Janet Proulx, a history teacher at Howard S. Billings High School, and Charles Cabana, vice-president of the Association de parents du Grand Châteauguay.

Through his character and involvement, Jean-Pierre Houde, although only briefly a member of the Châteauguay community, left his mark on its collective memory. Many tributes have been paid in his honour, both in local and national newspapers and at various regional cultural events.

However, the most significant commemorative event was organized the year after his death by the presidents of the four parish recreational organizations in Châteauguay, Walter Field, Jean Longtin, Jean-Paul Martineau and Guy Gibeau. They proposed that the cultural centre’s auditorium be renamed the Auditorium Jean-Pierre-Houde. At the official unveiling, on May 1, 1980, teachers and students who had met Jean-Pierre paid him a final tribute. Since then, the theatre at the Centre culturel Georges-P. Vanier has proudly carried the name of this man who, in a short time, was able to greatly influence the development of local culture.

Cultural activities leader for the City of Montreal.

He worked for Bois-de-Boulogne CEGEP in Montreal and became a member of the Association Québécoise des travailleurs en loisir.

Mr Houde was hired by the Ville de Châteauguay.

Birth of his daughter Sophie.

Purchase of their house on Rue Spruce in Châteauguay.

Jean-Pierre Houde went to Quebec City for the final preparations of the Festival Création-Danse for the Province of Quebec.

On his return home, the aircraft in which he was travelling experienced technical difficulties, resulting in a crash.

The Châteauguay spring festival was held in honour of Jean-Pierre Houde.

The auditorium of the Georges-P. Vanier Cultural Centre was named “Auditorium Jean-Pierre-Houde.”

A proud defender of culture, he also enjoyed solo sports and outdoor activities such as climbing, cycling, sailing, camping and canoeing.

A devoted father, when his daughter was born, he insisted on getting up at night to take care of his little Sophie.

His relatives and colleagues at the time described him as a big, strapping fellow (he was 6 feet 2 inches tall).. He was particularly sensitive to the elderly and people with disabilities. In September 1978, Jean-Pierre Houde wrote a text in the Informo newsletter of the Service régional des loisirs du sud-ouest stating that the people of Châteauguay and the surrounding areas would now have access to a program of 27 new cultural workshops, all in partnership with 7 regional organizations, including the Chœur La Bohème and the Club Rendez-Vous. He concluded his article as follows: “We are therefore witnessing a major breakthrough on the part of the authorities, who now seem to be getting closer to the realities of the community. This may be a good sign for the future.“ 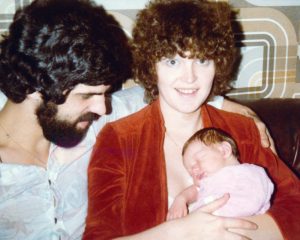 Jean-Pierre and his wife, Chantal Deschamps, on the birth of their daughter, Sophie. 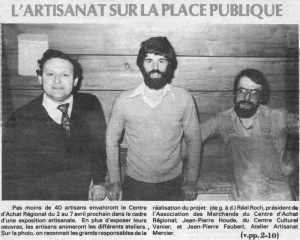 Jean-Pierre Houde (in the centre) promoting a skilled crafts exhibition at the Centre Régional Châteauguay. 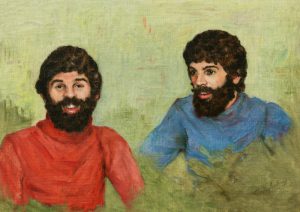 Jean-Pierre was not known for being punctual. He was often teased about this character trait. But with his enthusiastic communication skills, he had the gift of being well liked by people.