A historical narrative of the Maison Gravel, produced in collaboration with the Société du Musée du Grand Châteauguay. 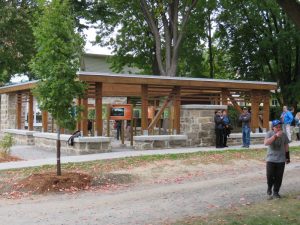 Located on the LePailleur property, the house we now call Maison Gravel was built by Catherine LePailleur, the daughter of notary François-Georges LePailleur. In early 1842, when Catherine LePailleur was about marry Jean Richard Houle, a merchant, construction was started on the house by father and son carpenters Antoine Desparois dits Champagne and mason Louis Archambault, from the parish of Sainte-Philomène.

LePailleur and Houle owned the house until 1857, but they did not live there for those 15 years. Caroline LePailleur, Catherine’s sister, and her husband, Louis Bourassa, lived there, even after the house was sold to a consortium made up of Alexis Macaire Gagnier and Alexis Gagnier. Alexis Macaire Gagnier, who acquired full ownership of the house after the consortium was dissolved, sold it in 1864 to Marie Anne Bernard, who sold it again five years later to the head teacher, Joseph Théodore Dorais. His parents and brother then lived there.

Dorais sold the house in 1875 to Dr. Julien Dupuis, who did some work on it, adding dripstone mouldings to the roof and replacing the cedar shingles with sheet metal. A veranda now graces the facade, the chimneys have been replaced and the dormer windows have gingerbread trim. All this work has significantly changed the appearance of the outside of the house. After the death of Dr. Dupuis in 1909, the house went to his children, Josaphat and Clémentine. Josaphat died in 1915, leaving the house to his sister until February 23, 1924, when it was acquired by Abbot Edmond Reeves-Gravel. A military chaplain living in Sainte-Anne-de-Bellevue, Reeves-Gravel does not seem to have lived continuously in the house with his brother and sisters, since he also acquired another home on Rue Monkland, in Notre-Dame-de-Grâce. He nevertheless kept the property until April 18, 1968, probably as a summer residence. During that period, the house lost some of its embellishments, such as the beautiful railings on the veranda.

The next owner, Aloysius Boyle, a salesperson from Châteauguay, wanted to turn the house into a restaurant. After beginning major renovations without the required authorizations, he abandoned everything and, in 1969, sold the house to Canadian Heritage of Québec, a consortium that includes members of the Molson family, which works to preserve built heritage. The consortium had already acquired Maison LePailleur on December 15, 1961. The owners were unable to invest the efforts required to restore Maison Gravel, however, and it stood empty, further deteriorating.

Ville de Châteauguay acquired Maison LePailleur and Maison Gravel on July 7, 1997. In 2016, the city undertook major upgrading work to convert the building into a relaxation area and historical interpretation site.

Construction contracts signed for the house.

The Houle-LePailleurs sell the property to a consortium comprised of Alexis Gagnier and Alexis Macaire Gagnier.

Dissolution of the consortium and division of its assets. Alexis Macaire Gagnier acquires the house.

The house is bequeathed to the children of Dr. Dupuis.

The house is purchased by Abbot Edmond Reeves-Gravel.

The house is transformed into a historical interpretation site and rest area.

On May 19, 1978, at 9:08 a.m., the Châteauguay firefighters received a call about a fire at 52 Boulevard Salaberry Sud. Two minutes later, they were on site and brought the flames under control in less than five minutes. Some youth had broken into the then-abandoned house and inadvertently caused a fire. 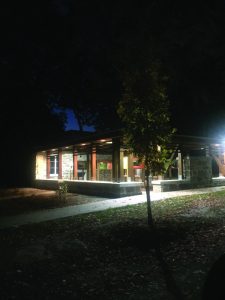 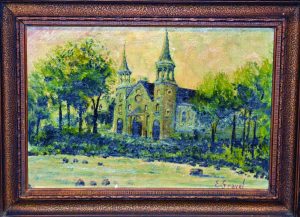 View of the church

Elzéar Gravel, the brother of Abbot Reeves-Gravel, was a painter. During his first summer at the house, he painted Saint-Joachim Church. It is clear that the view presented on the canvas is the one from the Maison Gravel veranda. This painting later belonged to Anna Laberge and is now part of the collection of the Anna-Laberge hospital foundation. 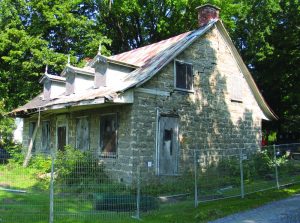 During the recent renovation work at Maison Gravel, stones and other materials were recovered, in part to rebuild a portion of the wall surrounding Saint-Joachim Church.