A historical narrative of the life of Marguerite d’Youville, produced in collaboration with the Société du Musée du Grand Châteauguay. 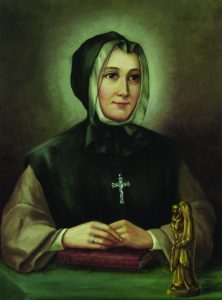 After losing her father at age seven, Marie-Marguerite experienced deep poverty. Through the influence of Pierre Boucher, her great-grandfather, she studied for two years with the Ursuline Sisters of Québec. After her studies, she took charge of the household tasks in the house of her widowed mother. She also helped her educate her three younger brothers and two younger sisters. With her mother and her mother’s new husband, she moved in Montréal in 1721.

On August 12, 1722, she married François-Madeleine d’Youville in the Montréal parish of Notre-Dame. Several VIPs of the colony attended the ceremony, including Governor Philippe de Rigaud de Vaudreuil, the Governor of Montréal, Claude de Ramezay, and the Governor of Trois-Rivières, Charles LeMoyne de Longueuil

Over the years, d’Youville suffered from her husband’s frequent absences and his alcohol trade with the Indigenous peoples. Eight years later, pregnant, she found herself widowed with two children to support. Indebted, she had to work for a living. She took an interest in religion and began many different charitable works.

While seeing to the education of her two sons, she welcomed a blind sexagenarian to her home on November 21, 1737. Then, with three companions, she dedicated herself to God on December 31, 1737. This is considered to be the founding date of their community. D’Youville had unknowingly become the founder of an institution later known as the Sisters of Charity of Montréal, the “Grey Nuns.”  In January 1745, a fire destroyed her home.
With her companions, on February 2, 1745, she made a commitment to pool everything to help more people in need.

Two years later, the Sulpicians persuaded the Governor of Beauharnois, Monseigneur de Pontbriand and Intendant Gilles Hoquart, all three of whom were administrators of the general hospital (poor house), to turn over the management of that institution to d’Youville. An order enacted on August 27, 1747, named her

provisional director of the hospital, subject to the pleasure of His Majesty and until it was ordered otherwise.

With her sisters and the collaborators she had gathered, Mother d’Youville welcomed to the decrepit building injured soldiers, the elderly, the mentally afflicted, the incurably ill, children in need and orphans.

On August 25, 1755, d’Youville and her companions received the habit from the Sulpicians. They adopted the name Sisters of Charity of the General Hospital, or Grey Nuns. The same year, Montréal was stricken by a small pox epidemic.

The next year, the Intendant, Francois Bigot, called on d’Youville to care for sick soldiers and prisoners, at the government’s expense. But Bigot skimped on the payments and the hospital had to cover most of the expenses itself. To lodge and feed all those people, the Grey Nuns had to buckle down: needlework, making sails and tents, crafting communion wafers and candles, preparing tobacco, renting land and selling their farm products. They entrusted the work to any hospital residents who had the strength to work and to the British prisoners who were being cared for at the hospital.

In 1765, a fire swept through the Hôpital général de Montréal. D’Youville encouraged her sisters and the poor to see the hand of God in this ordeal and to praise Him. At the age of 64, she began the reconstruction of the hospital.

The same year, the Grey Nuns purchased the Seigneury de Châteauguay from one of their boarders, Marie-Anne Robutel de La Noue. At the time, it was still largely uncultivated. The nuns had a big watermill built there and a bakery, as well as clearing and planting several arpents of land. An orchard was also planted. Overseeing this work herself, Mother d’Youville was exhausted by the frequent cart and canoe trips between Montréal and Châteauguay.

On December 23, 1771, after suffering from paralysis for several weeks, Mother d’Youville died in Montréal, in a room in her hospital, at the age of 70. Thérèse Lemoine-Despins, an orphan d’Youville had taken in, succeeded her as Mother Superior of the Grey Nuns.

During the Seven Year War (1756–1763), there were so many British soldiers treated at the general hospital that one of the wings was called the “Salle des Anglais” (the English room).

The term “Grey Nuns” to refer to the Sisters of Charity of Montréal stems from the nasty jibes of people referring to d’Youville’s husband’s past, as he was a bootlegger who traded alcohol and brandy with the Indigenous bands. Other wagging tongues also accused the sisters of being “grey,” another word for drunk.

D’Youville was the first person born in Canada to be canonized. 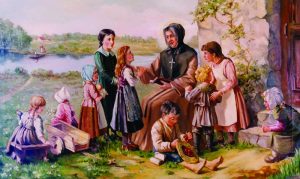 Given responsibility for the general hospital of Montréal, a kind of poor house.

Louis XV officially confirms Mother d’Youville as the administrator of the hospital.

The Sisters of Charity of Montréal become the owners of the Seigneury de Châteauguay.

Death of Marie-Marguerite d’Youville in Montréal.

Decree instituting her cause of beatification. She is declared Venerable.

Beatification by Pope John XXIII. She is declared Blessed.

Canonization by Pope John-Paul II. She is declared a Saint.

An agreement between the Congregation of Grey Nuns, the Fondations de la faune du Québec and Ville de Châteauguay results in the creation of the Refuge faunique Marguerite-D’Youville wildlife reserve on Île Saint-Bernard.

Inducted to the Canadian Medical Hall of Fame.

Her remains are transferred to the Sainte-Anne de Varennes Basilica.