A historical narrative of the Patriotes in Châteauguay, produced in collaboration with the Société du Musée du Grand Châteauguay.

The Atlantic Revolutions saw patriots in many countries battle for democratic freedoms and national self-determination. The Canadian nation1 also fought this battle, and the people of Châteauguay were at the centre of it.

The local Legislative Assembly representative, Joseph-Narcisse Cardinal, represented the Patriote party. He had the soul of a leader and, in July 1837, he helped found the Union patriotique de Châteauguay, the local branch of the Patriote party’s Central Standing Committee in Montréal. The anti-constitutional coercions of the colonial authorities led to demands for governmental reforms. LaPrairie county, to which Châteauguay belonged, joined the Confederation of Six Counties at a big convention at the end of October 1837.

In 1837, the Patriotes answered the call to resist a coup d’état from the military junta, but things remained quiet in Châteauguay. A few had to flee to the United States to avoid mass arrests. There, they prepared for another rebellion with the support of New Yorkers and Vermonters. Having returned home, Joseph-Narcisse Cardinal, Joseph Duquet, François-Maurice LePailleur, Abraham Desmarais and Henry Newcomb swore about 250 new members into the secret society called the Frères Chasseurs at the Widow Boudrias’s inn, which is where Cardinal had his notarial study and kept a store of weapons.

On November 3, 1838, the local Tories were disarmed and imprisoned in the village. Since Cardinal and Duquet had many friends among the Mohawk of Kahawake, the Patriotes wanted to ally with them to storm the military barracks in LaPrairie, but the mission priest used false arguments to win the Mohawks’ support for the colonial government. On the morning of November 4, the Patriote expedition to Kahnawake was ambushed, and about 60 Patriotes were delivered to the military authorities in Lachine. The detainees were assaulted by the Tory crowd leading them to prison.

The trials were rigged. The jury was made up of soldiers who had come under the fire of the Patriotes: of the 108 accused, 99 were condemned to death, including nine from Châteauguay. Cardinal and Duquet were publicly hanged on December 21, 1838. The popular displeasure was so high that the authorities commuted the other sentences: 58 Patriotes were exiled to the Australian penal colony. Of these, seven were from Châteauguay.

1 At the time, “Canadian” meant Francophones from the St. Lawrence valley.

Assembly of the Confederation of Six Counties.

Many people from Châteauguay attended the first declaration of independence of Lower Canada by Robert Nelson, in Noyan.

Organization of the Frères Chasseurs lodge in Châteauguay.

The Patriotes disarm and imprison the Tories of Châteauguay and Beauharnois.

Failure of the Patriote rebellion of 1838.

Skirmish between the British army and the Patriotes at the Châteauguay encampment.

Sacking of the village of Châteauguay by the Mohawk, Tory volunteers and British army. 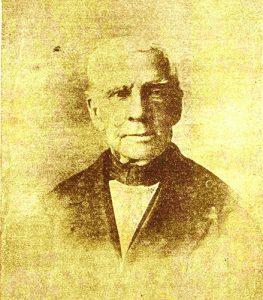 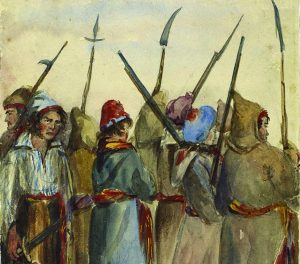 Since the Middle Ages, executions have traditionally been subject to the custom of trial by ordeal, based on the belief that a failed execution was divine intervention to save an innocent person, even if the accused had been caught red-handed.

The poorly attached rope around the neck of young Duquet tightened around his face when the trapdoor opened under his feet, saving him from an atrociously painful death. The Tory crowd called for mercy when the executioner was hauling the body of the condemned man back up to the platform, but despite the custom, he was hanged again. These were the first in a long series of hangings, and the authorities did not want to besmirch the credibility of the judicial process faced by the Patriotes.

François-Maurice LePailleur was banished for life with 57 other Patriotes. As soon as the verdict was in, he boarded the Buffalo with barely the time to write a farewell note to his family. On the ship, he was stripped of everything he owned and left to rot in the hold for five months. On arrival in the penal colony that was Australia at the time, he kept a daily journal that has since been published in full. His ability to write allowed him to take less difficult work than some of the other Patriotes. He was generally employed as a painter, which allowed him to save enough money to pay for his return trip after the general amnesty of the Patriotes, decreed by Queen Victoria in 1844. 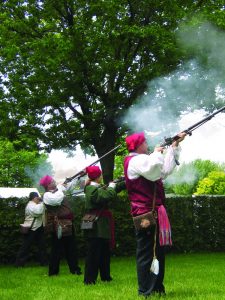