A historical narrative of the life of Raymond Laberge, produced in collaboration with the Société du Musée du Grand Châteauguay. 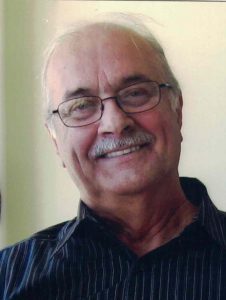 Raymond Laberge was born on October 28, 1941 on Boulevard Salaberry Sud. Most of his childhood adventures took place near the river, which was the theatre of many pirate stories and fishing. Surrounded by his two older brothers, his younger sister and many friends, Raymond enjoyed nature. A “specialist” in water bodies and fishing areas, he started at a very young age to offer his services as a guide to vacationers.

In September 1954, Raymond finished his elementary school studies at the École Modèle and began his classical education at the Séminaire de Valleyfield. He was a serious student and made friendships that he kept throughout his life. While at the Seminary, he decided to become a teacher, which led him to study teaching and school administration in 1962 at the Université de Montréal.

In 1965, Raymond began teaching at Saint-Jude school with his former teacher, Alfred Dorais, who was then the principal. Four years later, he held the position as principal at the Pie XII school. It was at that time that he launched his “large family garden.” He had two children and five grandchildren.

After many years in school administration, Raymond decided to renew his commitment to teaching in the field by accepting the position of assistant principal. He had the opportunity to get involved alongside teaching staff and contribute more actively to students’ education. He ended his 32-year career in schools at the Accore school when his state of health forced him to retire.

Still driven by an insatiable desire to learn and share his knowledge, Raymond Laberge decided to throw himself into his new passion, writing. Ranging from his patriotic manifesto and his guide to growing ground cherries to his Les Grands Châteauguois series, there were few topics that he did not touch on. In 25 years, he wrote an average of two books and many articles every year, for which he conducted extensive research. Although his fragile health slowed him down and sometimes kept him housebound, Raymond never let himself be defeated until he passed away on August 16, 2017.

His huge legacy to the region’s history now makes him a very part of the Les Grands Châteauguois family.

Birth of Raymond Laberge in Châteauguay.

Start of his education at the Séminaire de Valleyfield.

B.A. at the Université de Montréal.

Beginning of his career as a teacher at Saint-Jude school with Grade 7 students.

Principal of Pie XII school and then of Saint-Jude school.

Assistant principal at Notre-Dame-de-l’Assomption school and then at Gérin-Lajoie school.

Named honorary citizen of Ville de Châteauguay for his contribution to education.

In charge of the publication of Entre guillemets, the newsletter for the Commission scolaire de Châteauguay.

Assistant principal for grade 3 at Louis-Philippe-Paré high school, then L’Accore school before retiring.

Named an honorary member of the Société du Musée du Grand Châteauguay (SMGC). Raymond was sworn in by the SMGC as Frère Chasseur in the same year during the National Patriots Day activities.

Induction of Raymond Laberge into the Châteauguay Hall of Fame as a Builder of “Arts & Culture.”

Fishing often occupied Raymond during his free time. For a while, he and his brothers even gave their catches to the fish farm in Saint-Faustin, which came to collect them with its tanker truck.

In 1992, Raymond was chair of the committee supporting the Châteauguay library project, whose objective was to equip the municipality with an attractive building, better adapted to the needs of citizens and accessible to all.

Raymond Laberge donated his books to the Société du Musée du Grand Châteauguay, of which he was an honorary member. Today, they are an important source of information for the team at the Maison LePailleur museum.

I tried to do my best to leave my mark in Châteauguay. 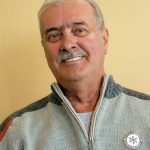 When he worked at the Saint-Jude school, Raymond created Agro Jeunesse, a project that encouraged young people to participate in maintaining a garden, flowers and trees on the school grounds. This way, students learned how to garden and appreciate the importance of nature.

Raymond Laberge (on the left) fishing with his brother René (on the right). 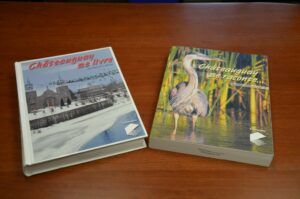 Cover of the book Châteauguay se raconte, a reference work by excellence on the history of Châteauguay.

Raymond Laberge did not claim to be either a writer or an historian, but he was keen to share the importance of the past through his handwritten texts. His sister Suzanne typed his texts and his wife Jocelyne edited them. Teamwork was an important part of the writing process.