A church born of conflict

In the 16th century, the chapel near the river basin had become run down, and the residents up- and downstream were asking for a new church, but they could not agree on where to build it. The religious authorities made a decision: it would have to be built inland but still be accessible by boat. Saint-Joachim Church was therefore built below the river’s first rapids and a village grew up around it.

The construction of Saint-Joachim Church began in 1775, and services started for the congregation in 1779, even though some work remained to be completed. A single bell tower stood over the main door. Point of interest: the stone masonry is not in the traditional layout of a cross pointed toward Jerusalem. In 1812, a stone sacristy was added behind the apse.

The failure of the Patriote insurrections breathed new life into the Catholic faith of French-Canadians, as attested by the construction of the current facade in 1840. The single bell tower was replaced by two, one on each side of the building. The magnificent neck-gabled facade is a rare architectural feature, especially combined with the Greco-Roman components: the triangular pediment held up by columns and the urn, sitting where the statue of the patron saint now stands. The roof is the typical Canadian metal roof and the weathervanes over each bell tower add to the heritage qualities of this church that has been officially listed as a historical monument by both Canada and Québec.

The inside of the church is full of little-known treasures, including the high altar of the famous Quévillon School, sculpted by Philippe Liébert and Amable Gauthier around 1802. Just above it, a painting of Saint Joachim by Liébert adorns the apse behind another of Gauthier’s masterpieces, a tabernacle containing several relics.

Several paintings by patriot and renowned painter Joseph Légaré are also on display, including The Holy Family, which the painter had to rework at the insistence of Monseigneur Fabre, who felt the Virgin Mary’s neckline was too revealing! A rare and extraordinary artwork was added to the church’s collection in the form of a statue of Notre-Dame-des-Champs, made of papier mâché and hand painted by the Grey Nuns between 1843 and 1857.

Proof of the existence of the first Christian chapel in Châteauguay, near the seigneurial manor on Île Saint-Bernard.

Construction and opening of the first church in Châteauguay, located near the river basin, near today’s Collège Héritage.

The river basin church was partly destroyed by the British army during the Seven Years’ War that lead to the conquest.

Construction and opening of Saint-Joachim Church.

Construction of the first presbytery of Saint-Joachim Church, now banished beneath the pavement of Rue Principale.

Expansion of the church’s facade and construction of two bell towers.

Improvements to the church: construction of the charnel house and installation of a statue of Saint Joachim over the main door.

Renovations inside the church

More renovations inside the church, by François-Édouard Meloche and Toussaint Xénophon Renaud.

Expansion of the nave.

Beginning of religious service in the seigneury

From the earliest days of the seigneury, religious service was offered by the missionaries of Sault-Saint-Louis (Kahnawake). In 1735, when Hilaire Girardy donated land to his fellow citizens for this purpose, the first church was built near the river basin. The Parish of Saint-Joachim de Châteauguay was created in 1743, shortly before the church was built. A presbytery and a cemetery adjoined the little church. When New France fell to Britain, the building was damaged by the British troops. 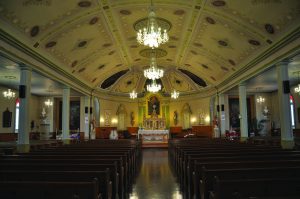 Tombs under the floor

In Lower Canada, French-Canadians practised pew rental. The parish rented one or more specific pews, for a specified period, to the wealthiest families. Some people even had the honour of being buried under their pews. Between 1780 and 1892, 13 people were buried beneath the floor of Saint-Joachim Church. Most were early pioneers, deceased at a venerable age. The highly esteemed bourgeois who built the Maison LePailleur, Pierre Bouthillier, and his wife were the last lay people to receive this privilege. In certain carefully chosen places, under the gospel transept or the altar, for example, are the tombs of a few priests.